For this sentence alone Philip Atlee deserves an enduring spot in the annals of American pulp fiction:

"My rectal sphincter throbbed again, all I needed, and I said 'nuts to you' and locked my bowels."
— Philip Atlee, The Fer-De-Lance Contract
James Atlee Phillips (pen name Philip Atlee) whose "Contract" series of books was comprised of 22 novels about counter-intelligence agent Joe Gall. Gall, a so-called "nullifier," is sent by a secretive U.S. government agency to trouble spots around the globe in order to solve—that is, erase—the problem. Somewhat surprisingly, Raymond Chandler wrote of him: "I admire Philip Atlee's writing enormously, the hard economy of style, the characterisations, and the interesting and varied backgrounds."
But there are reasons outside of his writing that make it worth remembering Philip Atlee. For starters, there was more than one pulp novelist in the Atlee Philips family. James Atlee Phillips was the brother of well-known CIA officer David Atlee Phillips, long-rumoured to be an organizing force behind the assassination of JFK.

In 1978, David Atlee Phillips published a novel about political assassins entitled The Carlos Contract: A Novel of International Terrorism. And then things get more interesting... here are a couple of tantalizing quotes from the Web page http://www.spartacus.schoolnet.co.uk/JFKphillips.htm:
First, David Atlee Phillips, who died of cancer on July 7, 1988, left behind an unpublished manuscript entitled The AMLASH Legacy, a novel about a CIA officer working at the Mexico City station in 1963.  From the novel:
I was one of the two case officers who handled Lee Harvey Oswald. After working to establish his Marxist bona fides, we gave him the mission of killing Fidel Castro in Cuba. I helped him when he came to Mexico City to obtain a visa, and when he returned to Dallas to wait for it I saw him twice there. We rehearsed the plan many times: In Havana Oswald was to assassinate Castro with a sniper's rifle from the upper floor window of a building on the route where Castro often drove in an open jeep. Whether Oswald was a double-agent or a psycho I'm not sure, and I don't know why he killed Kennedy. But I do know he used precisely the plan we had devised against Castro. Thus the CIA did not anticipate the President's assassination but it was responsible for it. I share that guilt.
There’s also a January, 2003 e-mail by James Atlee Phillips’ son (the folk rock singer Shawn Phillips) to JFK assassination researcher Gary Buell:

The "Confession", you refer to was not in so many words as such. I cannot remember the time frames involved, but this was what was told to me by my father, James Atlee Phillips, who is deceased. He said that David had called him with reference to his (Davids), invitation to a dinner, by a man who was purportedly writing a book on the CIA. At this dinner, was also present a man who was identified only as the "Driver". David told Jim that he knew the man was there to identify him as Raul Salcedo, whose name you should be familiar with, if your research is accurate in this matter. David then told Jim that he had written a letter to the various media, as a "Preemptive Strike," against any and all allegations about his involvement in the JFK assassination. Jim knew that David was the head of the "Retired Intelligence Officers of the CIA", or some such organization, and that he was extremely critical of JFK, and his policies. Jim knew at that point, that David was in some way, seriously involved in this matter and he and David argued rather vehemently, resulting in a silent hiatus between them that lasted almost six years according to Jim. Finally, as David was dying of irreversible lung cancer, he called Jim and there was apparently no reconciliation between them, as Jim asked David pointedly, "Were you in Dallas on that day"? David said, "Yes", and Jim hung the phone up.
The final word on pulp fiction, the CIA and JFK’s murder must make mention of E. Howard Hunt, CIA operative and Watergate “plumber,” who was undoubtedly the greatest writer of pulps (47 novels under his own name and a number of pen names) of any government agency, ever. In January 2007, while on his deathbed, Hunt allegedly confessed to having extensive foreknowledge of the JFK assassination, implicating Lyndon Johnson and the CIA.
Here’s an excerpt from William F. Buckley’s obituary of Hunt:
I remember with sad amusement an earlier experience of Hunt's with the law, this time involving his novels. Allen Dulles, then head of CIA, called him in one day and said, Howard, I know the rules are that this office has to clear all manuscripts by our agents. But you write so many, you're wearing us out. So go ahead and publish your books without our clearance, but use a pseudonym.
Hunt handed me his latest book, "Catch Me in Zanzibar," by Gordon Davis. I leafed through it and found printed on the last page, "You have just finished another novel by Howard Hunt." I thought this hilarious. So did Howard. The reaction of Allen Dulles is not recorded.
In a 2004 audio recording Hunt named fellow pulp novelist David Phillips as a participant in the JFK assassination:
I heard from Frank [Sturgis] that LBJ had designated Cord Meyer, Jr. to undertake a larger organization while keeping it totally secret. Cord Meyer himself was a rather favored member of the Eastern aristocracy. He was a graduate of Yale University and had joined the Marine Corps during the war and lost an eye in the Pacific fighting.
I think that LBJ settled on Meyer as an opportunist like himself and a man who had very little left to him in life ever since JFK had taken Cord's wife as one of his mistresses. I would suggest that Cord Meyer welcomed the approach from LBJ, who was after all only the Vice President at that time and of course could not number Cord Meyer among JFK's admirers—quite the contrary.
As for Dave Phillips, I knew him pretty well at one time. He worked for me during the Guatemala project. He had made himself useful to the agency in Santiago, Chile where he was an American businessman. In any case, his actions, whatever they were, came to the attention of the Santiago station chief and when his resume became known to people in the Western hemisphere division he was brought in to work on Guatemalan operations.
Sturgis and Morales and people of that ilk stayed in apartment houses during preparations for the big event. Their addresses were very subject to change, so that where a fellow like Morales had been one day, you'd not necessarily associated [sic] with that address the following day. In short, it was a very mobile experience.
Let me point out at this point, that if I had wanted to fictionalize what went on in Miami and elsewhere during the run up for the big event, I would have done so. But I don't want any unreality to tinge this particular story, or the information, I should say. I was a benchwarmer on it and I had a reputation for honesty.
I think it's essential to refocus on what this information that I've been providing you — and you alone, by the way — consists of. What is important in the story is that we've backtracked the chain of command up through Cord Meyer and laying [sic] the doings at the doorstep of LBJ. He, in my opinion, had an almost maniacal urge to become President. He regarded JFK, as he was in fact, an obstacle to achieving that. He could have waited for JFK to finish out his term and then undoubtedly a second term. So that would have put LBJ at the head of a long list of people who were waiting for some change in the executive branch.

One can’t help wondering if these dead pulp novelists would have proven to be less dangerous if they had had less of the pulp novelistic imagination in them: history could have been significant;y different but for these CIA officers and operatives adhering to a "boy’s own adventures" credo of live by the pulps, die by the pulps. It seems fitting that Hunt may one day be best remembered through the portrayal of him by one of JFK's greatest admirers, Norman Mailer, in his 1991 novel Harlot's Ghost. 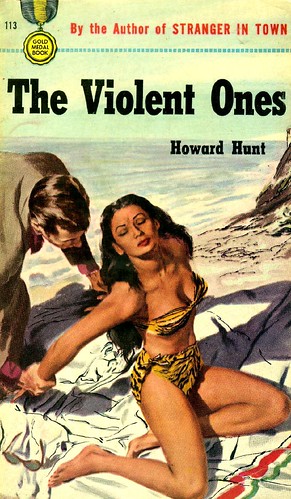 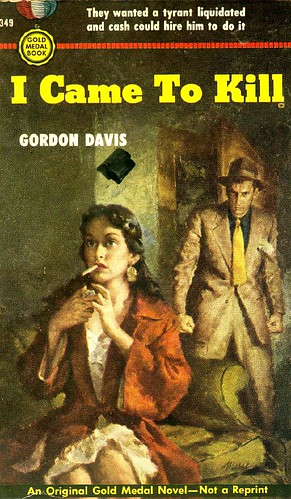 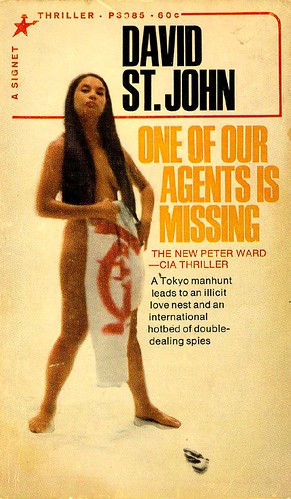 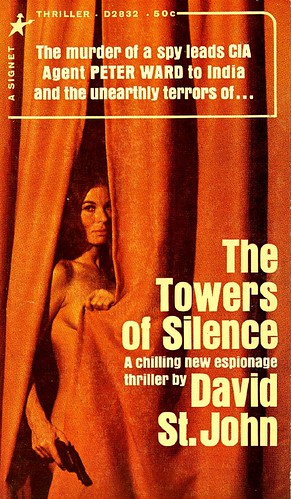 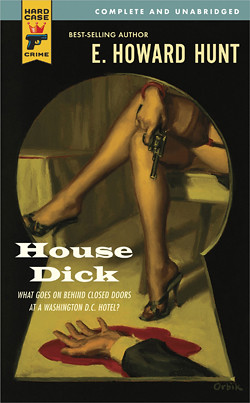 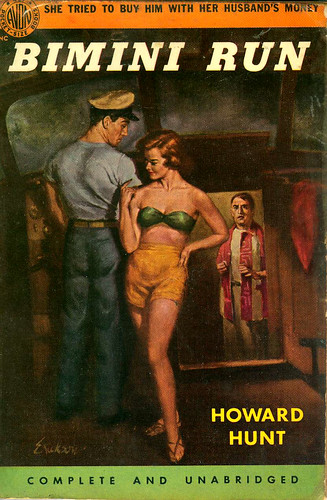 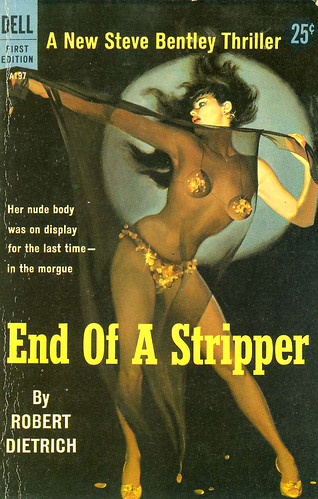 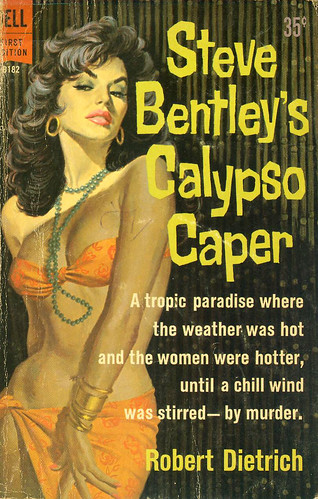